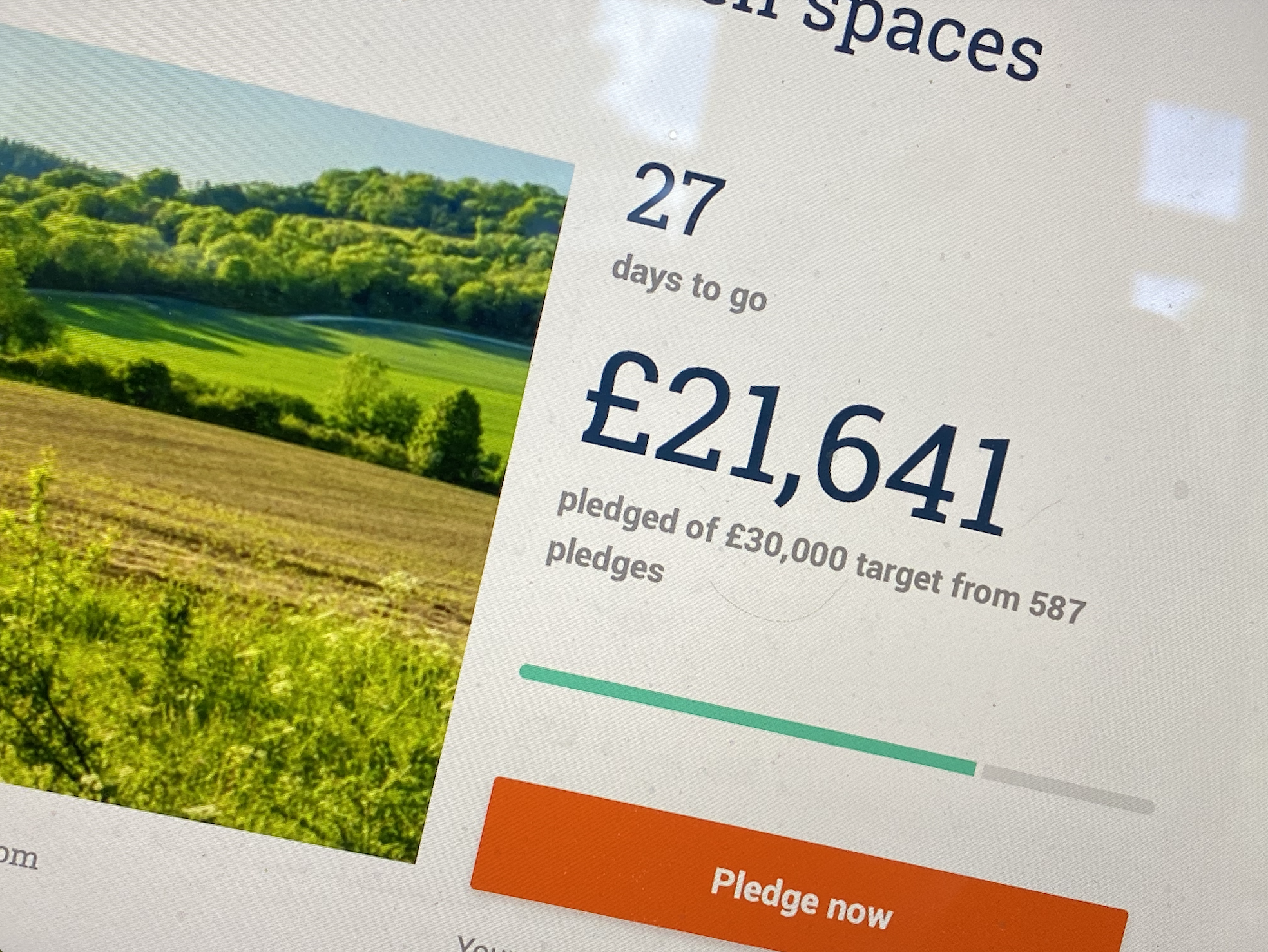 The local campaign groups representing Surrey residents have continued their opposition of plans to explore for oil and gas in the Surrey Weald. Protect Dunsfold group have announced that they will join Waverley Borough Council in seeking a Judicial Review of the Secretary of State’s decision to allow oil and gas exploration at Dunsfold. The Secretary of State overturned the Planning Authority’s previous refusal of UKOG’s application.

A Crowd funding campaign to help bring the Judicial Review to court has started assisted by the Good Law Project. Protect Dunsfold ltd. received legal advice that there are good grounds to apply for the decision to be reviewed by the courts. Waverley Borough Council received similar advice from their own lawyers and Protect Dunsfold will be cooperating as the case goes forward. Their participation is important because unlike Waverley, their costs can be capped and Crowdfund contributions can go toward Protect Dunsfold’s costs. In this way the Waverley’s costs can be mitigated.

Pledge support to the fund

The background to the actions of both Protect Dunsfold and Waverley Borough Council is explained in this BBC Radio Surrey interview:

Waverley Borough Council’s Executive have agreed to seek permission to challenge the planning appeal decision which allowed exploratory oil and gas drilling at Loxley, a site just north of Dunsfold. In May this year, the Secretary of State for Levelling Up, Housing and Communities overturned Surrey County Council’s refusal of planning consent for an exploratory well and side-track at the site.

A Special Executive meeting was held on Monday 18 July, to give councillors the opportunity to discuss and agree their response to the ruling. Waverley has consistently expressed its opposition to any oil and gas exploration at the site, which lies in the Area of Great Landscape Value (AGLV) immediately adjacent to an Area of Outstanding Natural Beauty (AONB). 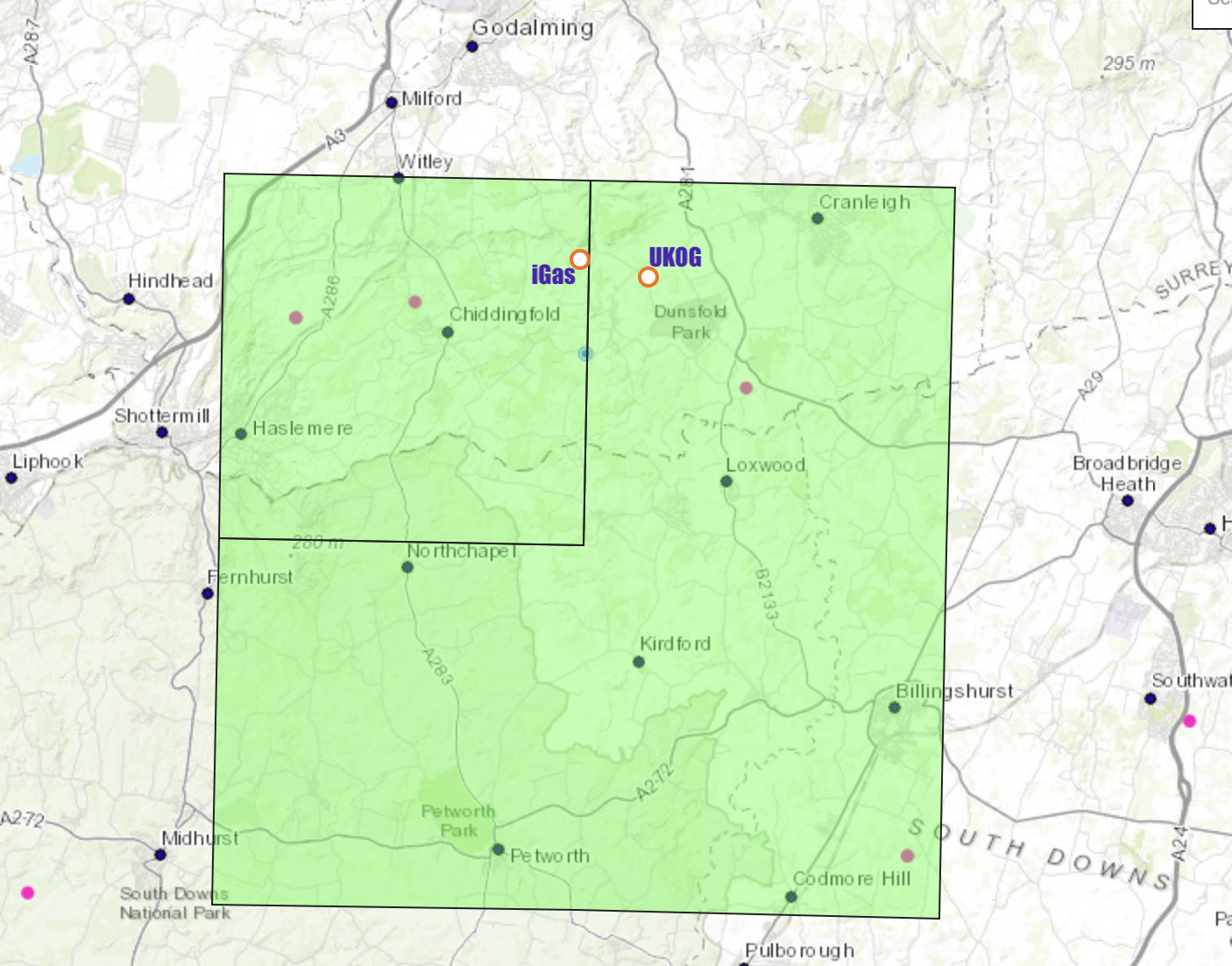 Here is link to a map overview of the licences to exploit oil and gas in Waverley and part of Sussex. This will show licences granted to UKOG and iGas to explore and extract hydro carbons in PEDL234 and PEDL 235 licence areas that stretches from Witley in Surrey to Pulborough in Sussex. UKOG have earmarked High Loxley near Dunsfold, and have planning permission to drill . IGas have earmarked a field just South-West of Loxhill near Hascombe. Companies with PEDLs have licence rights to drill anywhere they can find a well site within the green box of the licensed area and once underground they can also drill horizontally, but the drilling cannot extend beyond the green box. 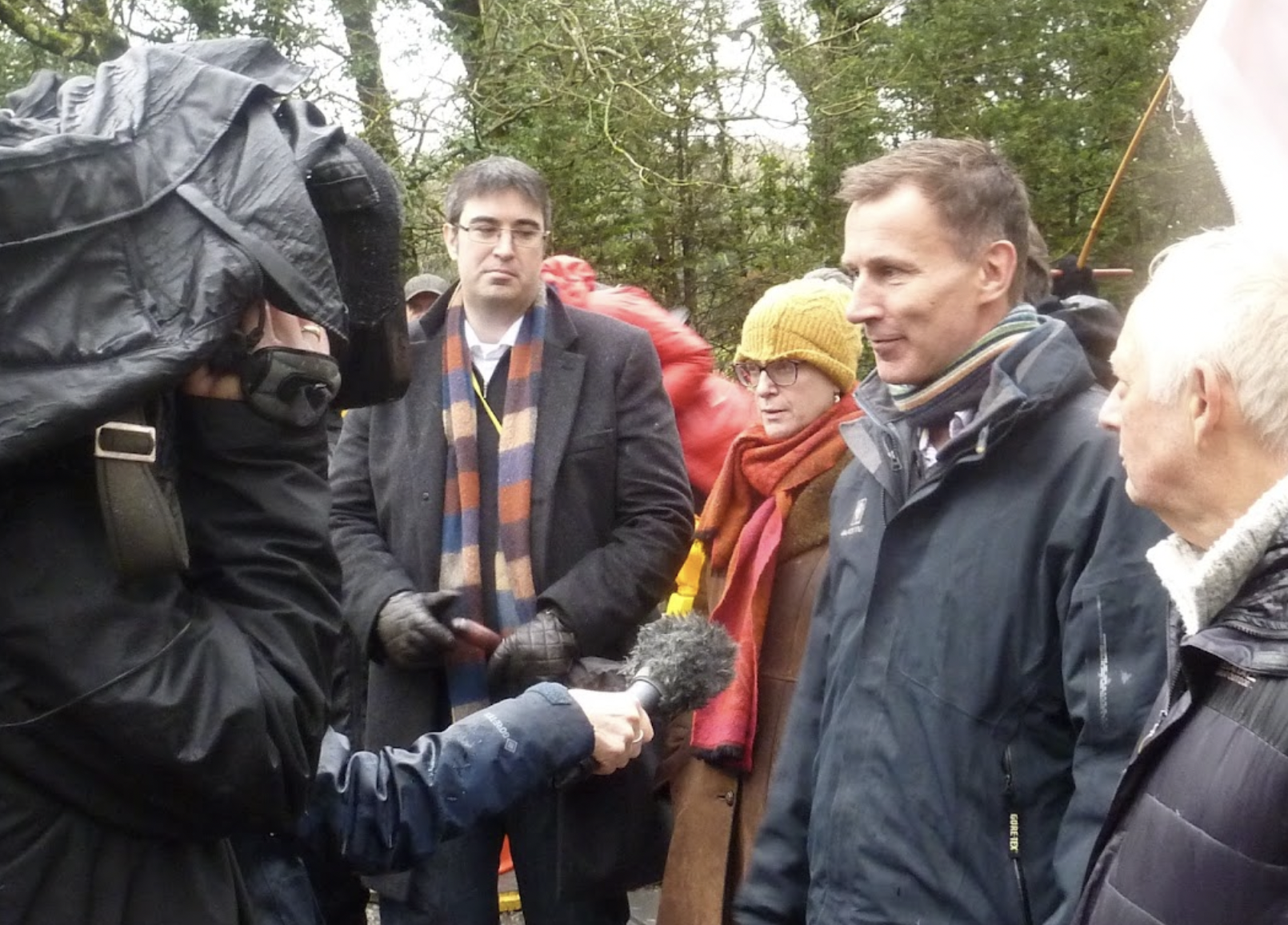 SW Surrey MP Jeremy Hunt has been written to Secretary of State Michael Gove about the decision to overturn Surrey County Council’s refusal of plans to drill for oil and gas at Dunsfold.

Jeremy has stated on his website: “The government’s decision to allow drilling and fossil fuel exploration in Dunsfold is wrong and a bitter disappointment both for me and for local residents. It will have damaging repercussions for the environment, local businesses and the Dunsfold community as well as being against the long term objectives of climate change policy. Surrey County Council has already rejected the application so to ignore the strength of feeling about this and press ahead regardless shows complete contempt for local democracy. I have written to @michael.gove.surreyheath urging him to reverse this flawed decision and will speak to him about it at the earliest opportunity. I will also consider whether we can take this decision to the High Court although this is very difficult to do successfully.”

END_OF_DOCUMENT_TOKEN_TO_BE_REPLACED

On 7 June 2022, Stuart Andrew MP, acting on behalf of the then Levelling Up Secretary of State Michael Gove, gave UKOG consent for 3 years exploratory drilling at Dunsfold.

The full decision can be read here.

UK Oil & Gas announced on February 10th 2021 that it had lodged an appeal against Surrey County Council’s decision to refuse planning permission for mineral exploration at Loxley near Dunsfold.

You can help by stating your support for the decision to refuse the application. Comments regarding the appeal are due by 6th April 2021. Please see this page for more info on how to comment:

They said the proposal contravened local planning policy on transport and landscape grounds.

There was also concern that the wellsite would damage nearby local businesses, particularly a wedding venue, craft brewery and farm that hosts a cancer-awareness festival.

A previous planning committee on 29 June 2020 voted to refuse by the same margin. That decision was later rescinded after technical problems with the online meeting.

On both occasions, councillors went against the advice of planning officers who had recommended approval of the application.

The full story at DrillorDrop

Monday 3rd August: Surrey CC have now declared that their Planning decision to refuse UKOGs application was invalid due to technical and procedural issues during the meeting on 29th July.

For a comprehensive overview of the reasons given read Ruth Hayhurst’s overview on DrillorDrop.com.

Drill or Drop’s reporting of the announcement 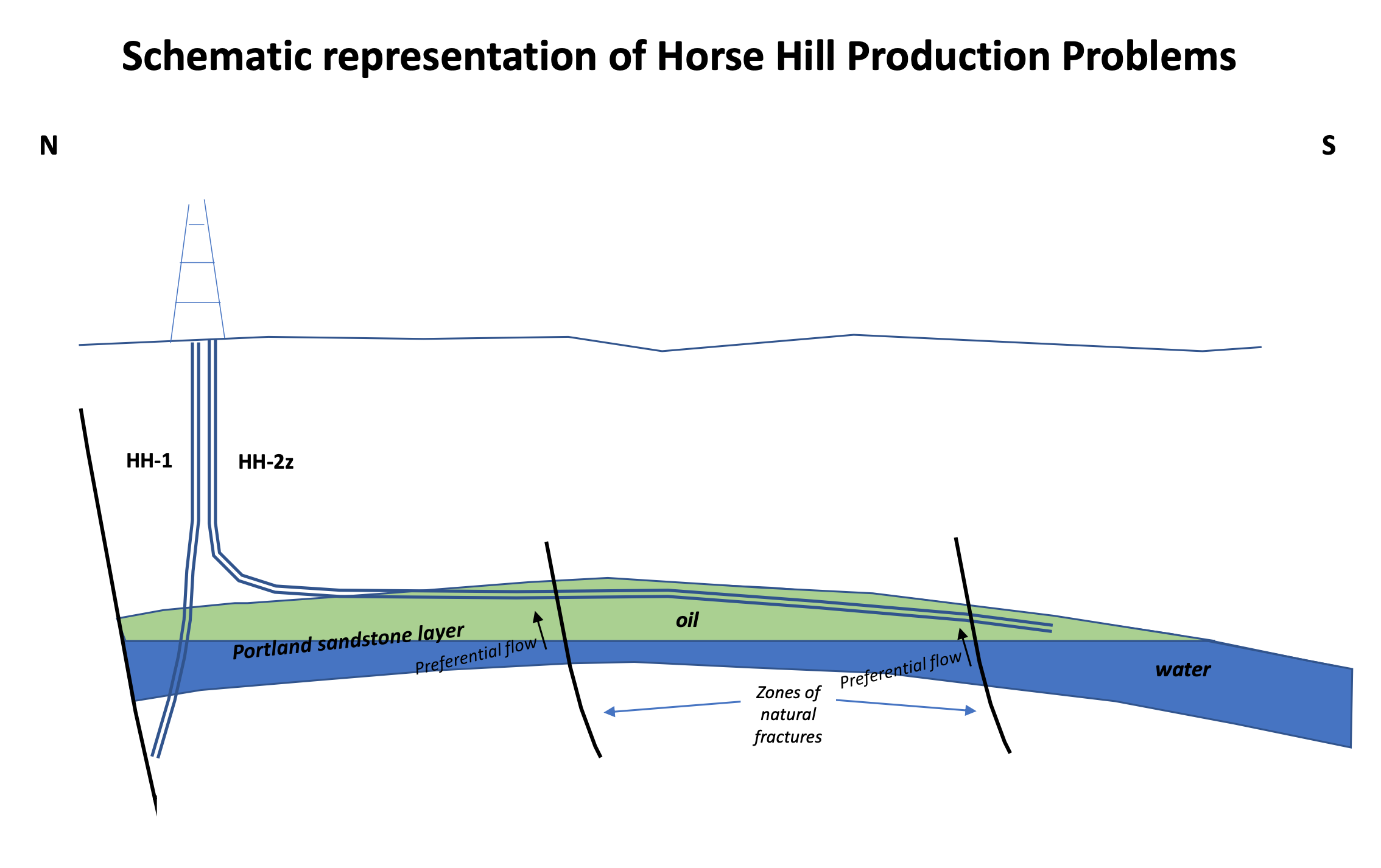 So what are the problems at Horse Hill?

Horse Hill-1 was drilled as a slightly deviated well. This means that it is more of less vertical when it goes through the reservoir sections. That, in turn means that the length of well passing through the oil column is limited. So the amount of oil that can flow into the well is restricted to that surrounding a few tens of metres of borehole.

END_OF_DOCUMENT_TOKEN_TO_BE_REPLACED

Will UKOG clean up its mess at Dunsfold?

UKOG 234 Limited (the applicant at Dunsfold) is a subsidiary of a very small oil and gas company, UK Oil and Gas. If UKOG 234 are ever granted permission to drill, will they actually have the hundreds of thousands of pounds which will be required to cover the costs of removing the security fencing, vehicle access and concrete well pad and restoring the site to arable farmland? If they go bust who will clean up after them?

END_OF_DOCUMENT_TOKEN_TO_BE_REPLACED

It is just as Waverley Against Drilling (amongst others) has been saying for the last year to Surrey County Council – the Oil and Gas Authority says it does not have responsibility for securing planning restoration of oil and gas sites when they are decommissioned. The OGA says that IS the responsibility of the “Minerals Planning Authority” i.e. Surrey County Council in the case of Dunsfold.

END_OF_DOCUMENT_TOKEN_TO_BE_REPLACED

The dust is settling just a little on the news that Surrey County Council has voted against UKOG’s application to drill in Loxley, near Dunsfold. This is a very exciting and well deserved result for all who have campaigned to stop the proposal, so we are tremendously pleased to have achieved this historic landmark victory. The local group Protect Dunsfold started in March 2019 with very little experience between us; since then there has been a great deal of hard work done by a small group of people working continuously over the intervening time.

END_OF_DOCUMENT_TOKEN_TO_BE_REPLACED 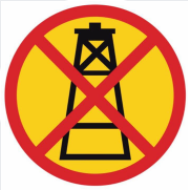 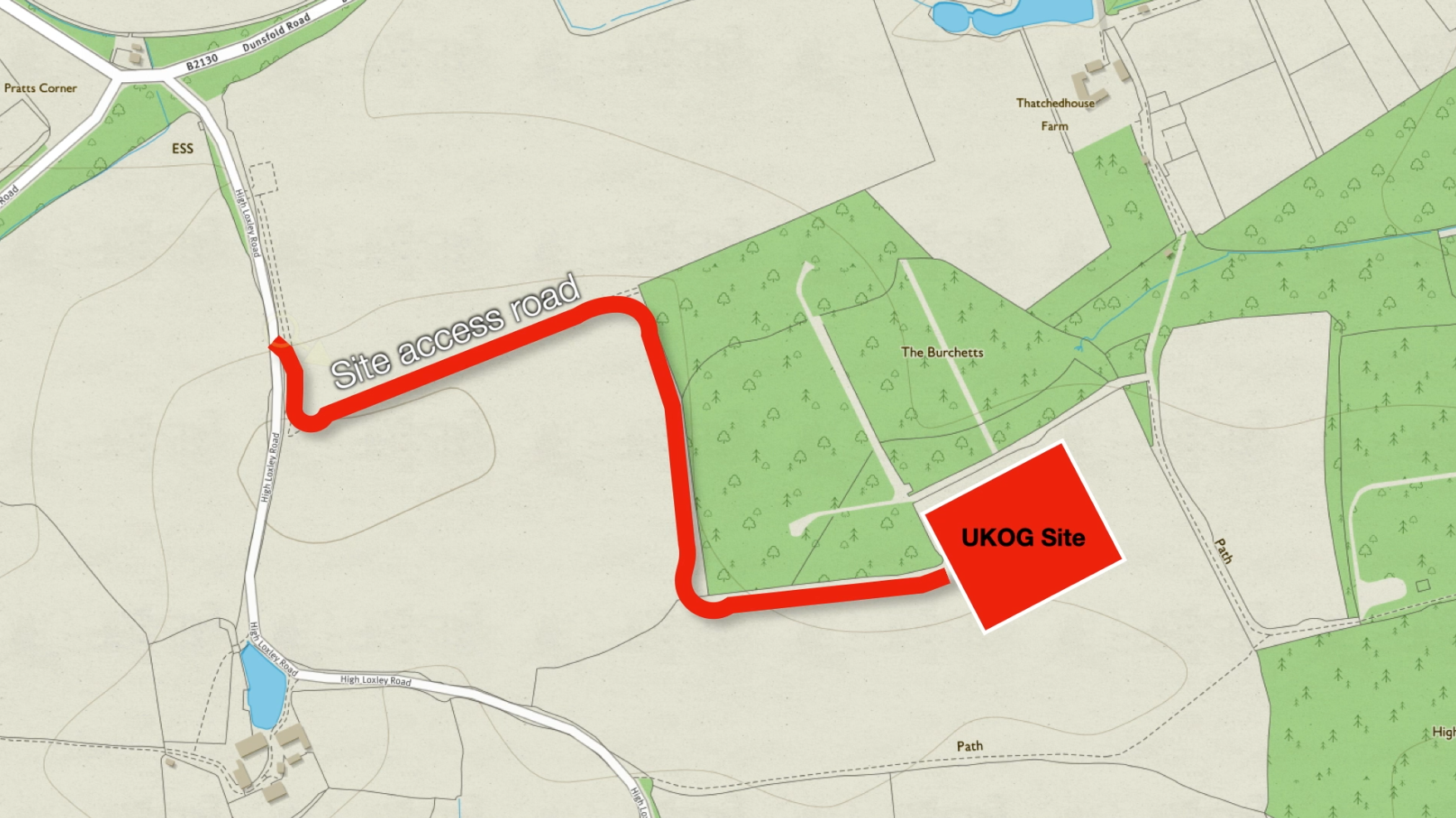 Update on UKOG Planning application There have been two significant changes to the progress of this application from UKOG (234) Ltd to drill for oil/gas on land down High Loxley Road, just outside the village.

The hearing was due March 25th but has been delayed again until April 16th; with the impact of the coronavirus emergency it is possible that SCC will have to postpone all such hearings further. TBC

END_OF_DOCUMENT_TOKEN_TO_BE_REPLACED 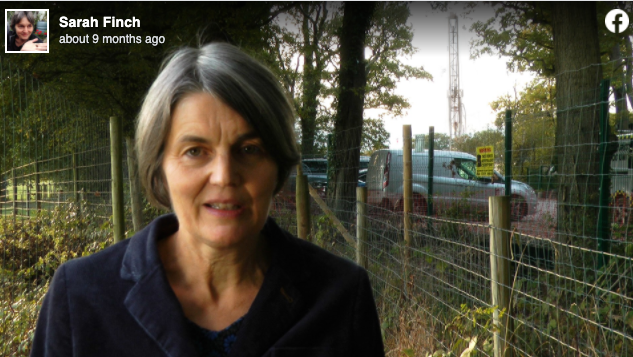 The recent planning approval of the production phase at Horse Hill has drawn heavy criticism. Sarah Finch is aiming for a judicial review of the decision and you can read the story, and donate to her cause here:

Waverley Borough Council convened a public listening panel to provide a forum for expert witnesses, interested parties and local residents and bodies to present information about the proposed drilling in the Borough.

A video of proceedings is online: